Cider Description: Wrangletown Cider’s Fieldbrook Nursery Orchard is a dry Farmhouse style Cider.  It is sourced from a blend of Heirloom and Culinary apples grown in Fieldbrook, California.  This cider from Fieldbrook Nursery Orchard is bold, refreshing and full of fresh apple flavor.  It has strong apple aromas and a fruity and full mouthfeel.   This cider was fermented in stainless steel barrels.  Varieties include Spartan, Glowing Coal, Pink Pearl, King and Cortland.

Price:  n/a (retails for $18)
Where Bought:  n/a
Where Drank:  home
How Found:  The owner/cidermaker contacted me. 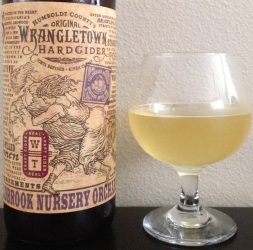 My Opinion:  This isn’t my favorite style of cider; I usually go for a more intensely flavored cider, and I found this a bit nuanced.  However, I certainly couldn’t find any faults, and didn’t dislike it.  This will likely appeal to folks who enjoy wine and milder food-friendly ciders.  I always think of my personal opinion as more of an afterthought to my reviews (which is why I don’t rate ciders here).  Everyone has a different taste in ciders, and every cider won’t appeal to every person.

Closing Notes:  All in all, Wrangletown’s lineup is on the entry level end of the farmhouse-style spectrum, with only a touch of sourness & funk, so they remain rather easy to drink / consumer-friendly.  However, the flavor intensity was lower than I prefer, very nuanced, and all four ciders were quite similar (and the other four folks I shared the ciders with also agreed on all those points).

I think their ciders would especially appeal to wine drinkers, and are food-friendly.  My favorite of the four was the Oak Barrel Aged, as I found it to be the most flavorful and unique.  Also, although the labels look really cool, I think they could be a detriment in the long term, as it is very difficult to tell the varieties apart (as only the name varies, on the bottom left), so a consumer could assume they only make one variety.