Review of Henney’s Vintage Still 2014 cider.  It is my first time trying any of their cider, but I am a big English cider fan (see here for some examples). 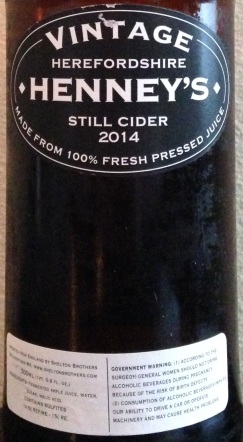 Cider Description:  This Vintage cider is made from a single year’s harvest.  It is naturally still and has been only coarsely filtered in order to retain as much flavour as possible.  Sip or quaff, we don’t mind, as long as you enjoy it.  Cheers!

No artificial sweetener, colourings, or flavourings added.  May appear cloudy and have some sediment.  Serve lightly chilled.  Contains sulphites to preserve freshness.

Cidery Description:  At Henney’s we believe that the best way to make cider is to start with high quality ingredients and to keep the process as simple as possible.  This has helped us to win many prestigious awards in recent years.  Each Autumn, carefully selected, locally grown, varieties of genuine cider apples are milled, pressed, and fermented.  The resulting cider is then blended and stored through the winter allowing it to mature and develop a rich and mellow flavour.

Price:  $6
Where Bought:  Bushwhacker Cider in Portland Oregon
Where Drank:  home
How Found:  Browsing.  I had never seen their cider, but had heard of it. 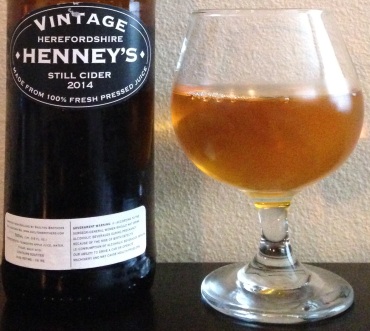 My Opinion:  Awesome!  I started off a bit on the fence about this one, but as it warmed up from fridge temperature, the flavor got more rich & complex, and surprisingly, less bitter.  I think this cider has a wonderful balance; I’ve had a number of English ciders that go too dry and/or too bitter for my liking, but this was just about perfect.  I wouldn’t have minded a touch more sweetness, but I certainly didn’t miss it either.

Most Similar to:  Dunkertons Dry

Closing Notes:  Next up I have Henney’s Dry variety (they also offer Medium and Sweet varieties, but it doesn’t appear that either of those makes it to the U.S., only the Vintage and Dry).  This cider is an amazing value at $6.  I’m always surprised that you can get an imported cider made from cider apples for less than the cost of a local craft cider made from dessert apples (due the larger scale of production of those types of ciders and the lower cost of cider apples in the UK).  Too bad I haven’t seen it in Seattle yet.  I also haven’t yet seen Dunkertons in Seattle, and can no longer find Sheppy’s Oak Matured.  Too bad, as those are three of my favorite English ciders (Aspall Imperial is another).  Next time I’m in Portland I’ll have to pick up a lot of English cider!

Have you tried Henney’s cider?  What did you think?

Cidery Description:  The Chevalliers have been making cyder at Aspall for eight generations, since 1728 when Clement Chevallier fermented his first batch of Normandy style Suffolk cyder. They still produce cyder using only the fresh juice of whole Suffolk apples and the philosophy championed by their founding ancestor, Clement. Still owned and managed by the Chevallier family, Aspall is the oldest direct lineage cyder maker in the United Kingdom. There are no hidden partners or parent companies enabling Aspall to focus on making the best possible product without compromise. Truly family owned.

Price:  $8
Where Bought:  Schilling Cider House
Where Drank:  home
How Found:  I first tried Aspall (this one) at the Seattle International Beerfest in 2015, one of the first events I blogged (see here). 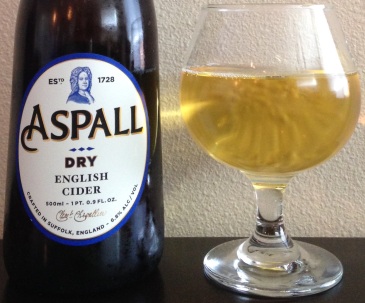 My Opinion:  This isn’t my favorite Aspall, but it is a very solid selection and a great value.  I haven’t disliked anything I’ve tried from them so far.  I like slightly sweeter than this however as I find them more flavorful.

Most Similar to:  Other Aspall ciders (although this is their driest selection in the U.S. at least), Dunkertons Dry, and Crispin Browns Lane

Closing Notes:  I think there are still some Aspall varieties left for me to try.  The biggest disappointment is that they appear to have stopped selling the black label Imperial cider in the U.S., and now only have the blue label one (which is still great, but I liked the black label one better).

Have you tried Aspall English cider?  What did you think?