>>This is a review of a sample bottle provided to Cider Says by Eden Specialty Ciders (the cidermaker Eleanor brought it to me in her suitcase!).  Although I will take care to treat it the same as any other review, there is always the potential for bias as I received it for free.  The only consideration I knowingly made was pushing this up in my cider review cue.  I love free stuff, especially cider!  Want your cider or cider-related product reviewed here?  Contact me.<< 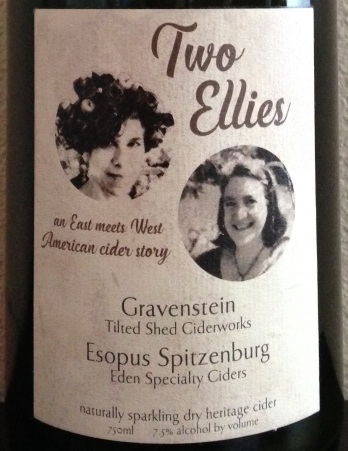 Cider Description:  This special cider is a cross-country collaboration between the two Ellies of American fine cider – Eleanor Leger of Vermont’s Eden Specialty Ciders and Ellen Cavalli of Sonoma Country’s Tilted Shed Ciderworks – who each contributed an hierloom apple variety particular to their terroir to showcase their mutual passion for traditional cidermaking.

A bit on terroir:  The term is most commonly used in the wine world, and describes the impact of the region (soil, topography, climate, etc) on a product.  Even ciders made from the same type of apples & yeast using the methods can vary widely region-to-region as the apples are different due to the environmental variance.  For example, the same variety of apple from the NE will commonly be significantly higher in acid than those from the NW.

My Opinion:  I liked but didn’t love this, but that was anticipated, as my personal preference isn’t typically for dry acidic ciders.  However, it was expertly crafted.  I enjoyed this cider more at close to room temperature, as that cut the sharp acidity and let the fizz settle down.  My husband was a huge fan, as expected, as dry sparkling cider is his favorite.  It had a surprising amount of tannins for being made with heirloom (not cider) apple varieties, which I enjoyed.  I’d recommend Two Ellies for lovers of dry, acidic, highly carbonated ciders.

Most Similar to:  This reminded me of Tilted Shed Lost Orchard & Understood in Motion 02 (but both of those were nearly still), and Eve’s Beckhorn Hollow (except that had some different flavor notes).

Closing Notes:  Even though this isn’t a personal favorite, I’m glad I got the opportunity to try it and share about it.

Side Note:  Eden has previously collaborated with Angry Orchard (see my review of Understood in Motion 01), and also recently released a budget-friendly cider made with Québec dessert apple varieties, called Border Buster (see this article).  Tilted Shed has also been staying busy, with multiple new releases, as announced on their Facebook page.

Have you tried any ciders from Eden or Tilted Shed?  What did you think?