Cider Description:  This is our second cider in our single varietal series. We use Harrison apples it in our ciders often because its great for blending with other apples, but since it makes such good cider on it’s own, we chose too make a single variety cider. It is golden colored, with spiced apple, honey notes and a deeply rich mouthfeel finished by a lingering hint of ginger.

Cidery Description: From our orchards to your glass, TCW controls every aspect of the growing and cidermaking process. TCW boasts the largest orchard of cider apple varieties in Washington state and the largest Perry pear orchard in the United States. We blend our cider fruit with all Washington apples. We’ve been growing apples, apricots, cherries and pears on Harmony Orchards – our family farm – since the 1930’s and are thrilled to be involved in Re:interpreting the tradition of cider making.

Where Bought:  Total Wine
Where Drank:  home
How Found:  initially at a tasting event 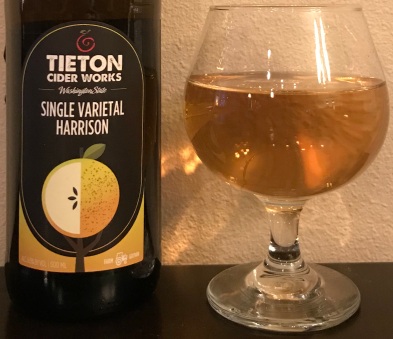 Tasting Notes:  On the sweeter side of semi-dry.  Light to medium bodied.  Moderate tartness and acidity.  Hints of bitterness and tannins.  No sourness or funk.  Notes of heirloom & green apples, honey, pear, lemon, and an overall flavor which I would best describe as creamy.  Moderate length tart finish.  Moderate apple flavor, sessionability, overall flavor intensity, and complexity.

My Opinion:  I enjoyed it.  Very approachable for an heirloom apple cider, as many tend towards super dry and tart.  Its at a nice price point too.

Most Similar to:  Snowdrift Forefathers and Locust Honey Pear

Closing Notes:  I always like finding ciders from heirloom and/or cider apples which are a bit sweeter, as I’m not usually into fully dry ciders, but like their flavor and complexity.

Have you tried Tieton Harrison?  What did you think?