Tasting notes from my 33rd visit to the Schilling Cider House in the Fremont neighborhood of Seattle WA.  Its actually been a few times more than that as sometimes I just pop in to buy bottles.  Check out my past posts with tasting notes here.

I was there on a Thursday afternoon, before the event for the 4th anniversary of the cider house.  It has been so long since my last visit as its not on my way home from work anymore, as I now both live and work up North, so its a bit of a long drive.  I got a flight, as usual.  Its pretty sweet that even with all the ciders I’ve tried, there were still plenty of new-to-me varieties (I skipped some which didn’t sound interesting though).

Schilling (Auburn WA) Passionfruit Lime (8.0% ABV):  This is a draft-only trial of a passionfruit cider with lime.  Semi-sweet.  Full bodied, and juice-like.  Notes of tart passionfruit and orange with a lime finish.  Hidden ABV.  I especially enjoyed the lime flavor.

Schilling (Auburn WA) Imperial Passport (8.5% ABV):  This is a draft-only trial of an imperial (higher ABV) version of their “Passport” cider, pineapple-passionfruit.  Very similar to the one above, except with pineapple instead of lime.  On the sweeter side of semi-sweet.  Full bodied, and juice-like.  Tart notes of passionfruit with hints of pineapple and mango.  Hidden ABV.  I like both this and the original version of Passport (see my review of a similar cider here).

Channel Marker (Seattle WA) Cucumber Blackberry (7.0% ABV):  This is my second time trying their cider.  On the sweeter side of semi-dry.  Very tart.  Slightly fruity, but to me it was more cranberry-pomegranate than blackberry, and I didn’t pick up any cucumber.  I thought it was average.

Schilling (Auburn WA) Impearial (8.5% ABV):  This is a draft-only trial version of sweeter version of their new Excelsior (see my review here), except with pear.  Semi-dry to semi-sweet.  Medium bodied.  Notes of tart pear, bittersweet apple, and oak.  Hidden ABV.  I liked this, especially as it is less tart as the canned version of Excelsior.

Honey Moon Mead & Cider (Bellingham WA) Cider Head Pineapple Rum (6.1% ABV):  This appears to be a draft-only new release.  Nearly clear and nearly scent-less.  On the drier side of semi-dry.  Mild pineapple flavor with an alcohol-forward rum & oak finish.  I would have preferred more flavor with this one.

My favorites were the three Schilling releases.  I also got a pint of the Passionfruit Lime, but didn’t finish it, as it was a bit filling and sweet to have in that quantity.  I was able to pick up some bottles to take home, but they were out of my favorite English ciders, so I guess I’ll just have to come back!  I tried a new food option this time, a poke bowl from Just Poke (a few doors down the street), which was awesome.

Tasting notes from my seventeenth visit to the Schilling Cider House in the Fremont neighborhood of Seattle WA.  Check out my past posts with tasting notes here.

I was there on a random Tuesday afternoon and enjoyed a flight of six ciders.  Even though I had just been there the week before, a good portion of the taps had turned over and there were plenty of ciders to choose from which were new to me.

Schilling (Auburn WA) Rhubarb Pear (6.0% ABV): I thought I hadn’t tried this one, but I actually had (its an apple cider with rhubarb & pear, also called Lumberjack and available in cans); see here.  I’ve tried many of their ciders previously (see here).  Pale peach hue.  Smells sweet, fruity, and mild.  Semi-dry.  Medium bodied.  Moderate tartness and acidity.  Mildly flavored–rhubarb, strawberry, pear, and peach.  Easy to drink.  I think I liked it better canned, as it was higher carbonation and more tart.

Finnriver (Port Townsend WA) Pear Wood (6.9% ABV): This is a Crew Selection keg-only release, a rendition of their Pear cider (which I reviewed here).  Its made from bittersweet apples with Malo-Lactic Fermentation and aged with oak staves, mixed with barrel aged cider, then backsweetened with pear juice.  I’ve tried many of their ciders previously (see here).  Semi-sweet to semi-dry.  Medium bodied.  Moderate tartness and acidity.  Hints of bitterness.  Notes of bittersweet apple, pear, and oak.  Fairly simple.

Greenwood (Seattle WA) Cedar Cider (6.5% ABV): This is a keg-only release.  I’ve tried a couple of their ciders previously (see here).  Mild scent.  Dry.  Light bodied.  Mild to moderate tartness, acidity, and bitterness.  Earthy wood flavor with some bite that reminds me of crabapples.  A hint of vinegar.  Citrus and vanilla.  Unique.

AEppelTreow (Burlington WI) Blackbird Berry-Apple (5.5% ABV): This cider is available in kegs and bottles, and is apple cider with black currant and elderberries.  I’ve tried a few of their ciders previously (see here).  Deep berry hue.  Smells of raspberries and blackberries.  Semi-sweet to semi-dry.  Light to medium bodied.  Moderate berry flavor, more raspberry than anything else.  I didn’t really detect black currant or elderberries.  Moderate tartness.  Low acidity.  Hints of tannins and bitterness.  Not overly juice-like which I notice often happens with sweeter berry ciders.  I found it to be very well-balanced and its one of my favorite berry ciders.

Cockrell (Puyallup WA) Pub Cider (6.2% ABV): This is a keg-only release.  I’ve tried a couple of their ciders previously (see here).  Smells sweet and rich.  Semi-dry to semi-sweet.  Frothy.  Very mildly flavored and it kinda tasted watered down, although it was medium bodied.  Apple-forward.

The AEppelTreow Blackbird Berry-Apple was oddly enough my favorite, probably as it was the most flavorful.  I would have guessed that I’d prefer the Bourbon Barrel or Pub Cider based on my typical preferences, but I didn’t really like either (especially the Bourbon Barrel, as I don’t like sour ciders).

Tasting notes from my eleventh visit to the Schilling Cider House in the Fremont neighborhood of Seattle WA.  Check out my past posts here.  I was there mostly as I wanted to pick up a couple bottles (Schilling’s new seasonal King’s Shilling brandy barrel aged & fortified cider and this year’s version of Two Towns’ Pommeau), but this isn’t exactly the kind of place where I can stop in without having some cider!

I got there after work, around 4pm, and started with a flight of five ciders (I had tried everything else so skipped out on #6).  I brought some take out food I picked up from PCC (the Caprese sandwich went well with 101 Cider House Piña Mint).

Schilling Blackberry Pear (Auburn WA), 5.5%:  This is a new draft-only release.  I believe it is apple cider with blackberry and pear juice infused after fermentation (vs. being a blackberry flavored perry).  Semi-sweet.  Full flavored with blackberry and a hint of pear.  Fruity, refreshing, and flavorful without being over the top sweet.  The apple remains pretty well hidden.  Medium bodied.  This was pretty good (and I’m usually not a big berry cider fan), although maybe I was just underwhelmed with most of the rest of the flight.  It reminded me of Atlas Blackberry (although less tart) and Crispin Blackberry Pear (although sweeter).

Schilling London Dry (Auburn WA), 6.5%:  Described as an English pub style cider, sold in four packs of 16oz cans and kegs.  Somehow I had never tried this one even though its been out awhile.  Dry.  High acidity.  Moderarate tartness.  Light bodied.  It was lacking the richness of English cider, likely as I doubt they used high tannin cider apples.  I thought this was a pretty average cider, but many people ordered pints of it while I was there (although maybe because it was the most inexpensive drier cider by far?).

101 Cider House Piña Menta (Los Angeles CA), 6.9%:  This is a new 101 Cider House release, a pineapple mint cider.  Smells of citrus and mint.  On the sweeter side of Dry.  A hint of sourness.  Citrus and mint notes.  I didn’t really pick up pineapple?  Moderately flavored.  Light bodied.  Unique with the mint flavor, but overall I thought it was average.

They also put Honey Moon CiderHead Quince on tap while I was there.

Honey Moon CiderHead Quince (Bellingham WA), 8.3%:  This is described as their Quince mead with cider, so that would make it a cyser.  Semi-dry.  Mild tannins, tartness, and acidity.  Mildly fruity.  Light and refreshing.  Mild to moderate flavored.  Tropical notes, passion fruit and pineapple.  This was good, but I prefer Eaglemount Quince, which was more complex and flavorful.

I wanted a little something else, but didn’t feel the need for another pint, so I bought a bottle of Celt for $3 and drank it there.  The Cider House is pretty awesome as they don’t charge extra to drink their bottled cider there (vs. taking it home).  An awesome cider for an awesome price!  Its the only French cider I’ve seen that comes in a multipack (4 bottles).  Check out my previous review here.  I had forgotten how I much I enjoy this cider, and picked up a couple more bottles to take home. 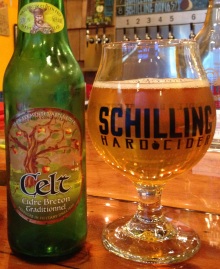 I’m excited to compare the last two years of Two Towns’ Pommeau in a vertical pour, now that I have a bottle of each.  I highly recommend it by the way, and if anyone is in the Seattle area, at $25 for an amazing 375ml bottle of 19% ABV Pommeau at the Schilling Cider House, its also a good buy.  I also spotted it at The Cave in Kirkland.

Availability:  Year round, only in WA

Description:  We’ve been part of the cider revolution since we first opened our doors in 2005.   CiderHead is an English style cider, made from fresh local apples with no added sugar or concentrate.  And while our line-up has expanded to meet demand, our commitment to quality craft cider remains simple and true.  It feels good to be a cider head.  A CiderHead is a person who loves hard cider – a lot.  We believe there are two types of people: (1) those who are ciderheads, and (2) those who will be ciderheads.  If you are in the latter group, it’s time to taste our CiderHead and get on with things.

We make all of our ciders using only fresh fruit.  We do not add sugar.  We do not use concentrate.  Just real craft cider made from fresh apples.  Naturally gluten free.  Our dry CiderHead is crisp and refreshing.  Unlike most of the ciders out there, it’s bone dry, but because we carefully select fruit with an acid profile it retains a tart, apple note. 5.5% ABV, it pairs perfectly with chicken, fish and pasta.

Made from a blend of cider and culinary apples.  They have a tasting room in Bellingham for their ciders and meads (and also serve wine and dessert) which is known for events such as live music and open mic nights.

Price:  ~$2.50 for a single can
Where Bought:  Full Throttle Bottles in Seattle WA
Where Drank:  home
How Found:  Browsing.  I’ve seen this brand, but hadn’t got around to trying it, and now that at least the flagship variety is sold in cans (since last summer, although they took a bit longer to make it into my area), it was less of a commitment. 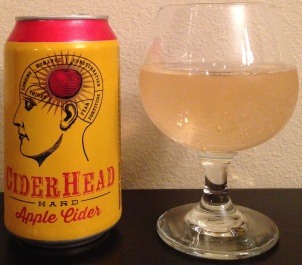 My Opinion:  This isn’t a style of cider I care for (I like more flavor and sweetness, and am not big on sourness or funk).  However, folks who like a truly dry local craft cider in the convenience of cans may be a fan.

Closing Notes:   I’m glad I finally got to try one of their ciders.  Maybe I’ll get around to trying something else from them next time, maybe even a mead.

Have you tried Honey Moon CiderHead?  What did you think?